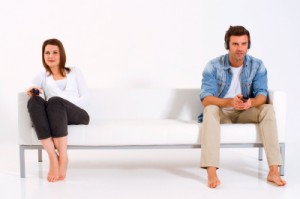 What do you do when you don’t have all the information or communication with someone?  Something feels “off”, AND you haven’t spoken directly about it.  Maybe THEY didn’t return a call or respond to an email, plans to get together never materialized, or were cancelled unexpectedly.  Or suddenly all communication has disappeared.  Maybe THEY haven’t reminded you lately that they “love you”, or responded in the manner you had hoped or expected.  What do you do?

Definition of “making stuff up” – Attaching a meaning or interpretation to the action or non-action without investigating the “made up” thought.

Isn’t this reasonable?  We’ve all watched enough TV and movies to know that “sometimes” in the absence of information “horrible things happen”…..they stopped loving us, you’re no longer important in their life, they’re secretly upset with you, torturing you purposely, or worse yet they fell in love with someone else.  I admit it.  I’ve found myself “making stuff up” in the absence of truth and full communication.  Have you?

“When we attach to a thought that is not grounded in reality, we are literally giving ourselves a “head-trip” and creating “stress” in our lives for no good reason.”

For the most part “making stuff up” is ludicrous, and only creates drama.  Not to pick on women, but I believe our gender tends to “make up” that we’re “not loved” or “no longer important”, more quickly and often than men do.  Although, I’ve known men to “make stuff up” too. This is silly.  And, it drives others crazy. You’ve probably experienced this phenomena both ways.

Why do we “make stuff up” about “not being loved or important”?  It stems largely from “insecurity”, doubting oneself, and expecting the worse.  And, it’s simply a bad habit formed through conditioning. Unfortunately, it often elicits the opposite result we desire.  So, the less we “make up”, the better.

In other situations, the simple reality is “we don’t know…YET”.  Quit hypothesizing and brainstorming the 10 most likely best and worst-case scenarios and just ASK.  The answer can often be had in ONE SIMPLE QUESTION.

Look at the FACTS…that’s “A”.  A fact is just that, a fact.  It’s an event.  It’s what happened.  Without any emotional element or meaning attached to it, it’s neutral.  It just IS.  All of these are simply facts…

Examples of Facts or Events:
“no returned call”
“didn’t respond to email”
“someone asked a deep personal question”
“cancelled plans”
“request to spend time together”
“someone is not paying full attention to you”
“someone is indecisive”
“a stranger smiles at you”
“they didn’t follow through on their word or were late”

B is what the meaning we “make up”, or attach to A, the fact or event.  The B isn’t grounded in reality.  It comes out of out mind.  What we “make up” ranges from “good to bad”.  Sometimes we’ll “logically deduce” this HAS to be the meaning.  Don’t be so quick to assume.  ASSUME……it makes an ASS of U and ME.

Examples of “Made Up Stuff”: 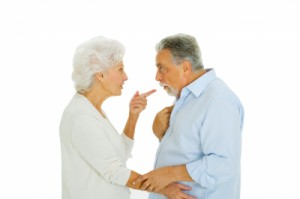 4 TIPS:  What to do when you are “making stuff up”

1.  ASK and CLARIFY the facts, when another person is involved; Useful when you’re lacking information or are unclear about another’s intentions, thoughts or feelings. Usually one simple question does it.   (And, while you’re waiting for the response, don’t fall in the trap of “making up more stuff” about WHY they haven’t responded instantaneously.)

2.  Look at the fact or event for WHAT IT IS.  It’s neutral. Pull the emotion out of it. Don’t take it personally. Imagine a stranger “not calling back”.  It’s ALWAYS the meaning we “make up” that distorts everything.  Remember this.

3.  Inquiry.  In Issue #27 I talked about “the work” of Byron Katie called “Loving What Is”.  Katie’s four questions allow you to examine the “made up” thought.  Which 100% of the time reveals it is, in fact, “made up” and silly to hang on to.  To learn more about “inquiry” visit www.thework.org or order the CD’s through the button above.

4.  “Make up” the opposite.  If you’re going to “make up” something, why not try on the opposite, especially when it feels better.  “He doesn’t love me anymore” turns into “He still loves me, maybe even more”.  It could be as true or truer.  And, until you KNOW differently, it feels better and supports you in getting more of what you want.

SOULFUL CHALLENGE:  Monitor yourself for one week.  Notice what you’re “making stuff up”.  Ask for clarification when needed.  View the fact or event as neutral.  Let go of the “made up” stuff.  How would your life be if you didn’t “make up” stuff??