The Future of Wind Turbines

My husband, John and I are both in the sustainable energy business. I’m helping shape one’s inner world. He’s focused on a solution for the outside world.

John was dwelling on how else his Skytran Team could use the core technology in their guideway… and in the middle of the night had a thought. If used in reverse, it could be used to power windmills. As serendipity goes, a customer found them.

After meeting the team, and not having any other viable solution to refurbish their wind turbines – they enlisted the intellects of the 6 founders of Skytran (plus a few other worker bees and vendors committed to work CRAZY hours).

90 days later, an old rusty wind turbine has twice the power of a modern day unit, with a fraction of the potential maintenance costs.

Here’s the before and after shots. 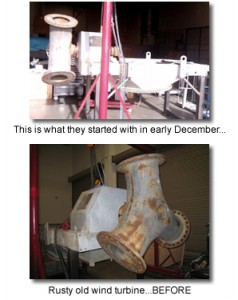 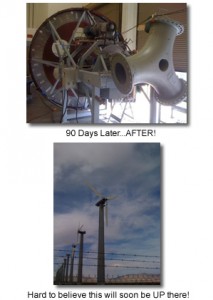