I was granted permission to share this inspiring article, courtesy of Rob Shore, shorespeak Blog 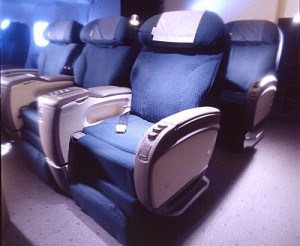 One of the perks of having dedicated 1.5 million miles to United Airlines is the ability to upgrade more times than not – a reward that I don’t take lightly in this era of packed flights, reduced services and full body screening.

Joining me in business class or first, depending on the aircraft, is the typical assortment of business professionals and the occasional leisure traveler. The travelers find their seats, dive into their reading material and frequently pay no attention to the other flyers that surround them.

Truth be told, that describes me. I covet the upgrade and keep to myself – rarely making small talk and not extending myself beyond the common human courtesy that should be an inherent part of air travel. After all, it’s a dog eat dog world in the “friendly skies.”

Today, as I settled in to prepare for the cross-country journey ahead, the ground crew was assisting a passenger into his seat at the other end of my business class row.

He was a mess. Visibly black and blue and wearing a neck brace and a nose splint, and still displaying a hospital wristband, it was apparent that his last few days had not been some of his best.

The patient gingerly took his seat, reclined his chair, closed his eyes, and prepared for the long cross- country flight – his journey made only slightly more comfortable, I assume, by the fact that he did not have to sit in economy.

It was easy to guess that he was alone. However, a few moments later a woman appeared and said to the patient, “There is a seat next to me, although it does not recline as much, if you want to move.” It seemed that his wife was seated in coach and, in an effort to care for him during the flight, was suggesting that he move to sit by her.

And that’s when it happened.

The complete stranger sitting next to the patient in seat 9D looked at the woman and said, “Here, take my seat.”

He calmly offered, as he rose up from his fully reclining 42″ of pitch where they were going to serve edible food and he wouldn’t have to pay for cocktails 9D seat, “That’s o.k., you should sit here.”

And with that he made his way back to the dark recesses of economy – to sit in 17C.

The woman was dumbfounded, infinitely appreciative, and moved to tears.

The former occupant of 9D expected nothing in return; he simply recognized that someone was in need and rose up (literally) to help.

The woman’s reward was an indelibly memorable moment wherein a complete stranger made a very difficult journey just a bit better.

The passenger in 9D had a reward that was arguably greater still: the quiet feeling of having made someone else’s day that much better.

For his grand gesture, “9D,” rather than being banished to economy, was expeditiously escorted by the flight attendant that witnessed his act of kindness to the cushy, comfortable private digs that only the fully flat reclining private pods and rarified air of United First could afford.

As it should be.